This Pride Month, we join in the celebration of LGTBQ community’s decades of activism and elevate their contributions to affordable housing. Habitat Wake supporters, staff, homeowners and our community at-large have benefited from the labor and creativity of this community, and for that we are grateful.

One of Habitat Wake’s supporters shared this about our mission:

“Habitat's mission is important to me as a bisexual woman, not only because I think affordable housing should be a human right, but also because it is so important for people who are queer to be able to live on their own away from often regressive family. I know that my inability to afford affordable housing has kept me in the closet for a long time. It is my hope that Habitat for Humanity can pave a more equitable path for a vulnerable population.”

We are committed to advancing housing affordability for everyone in our community, especially our most vulnerable, and are thankful for visionaries like Durham’s the Rev. Dr. Pauli Murray who worked to end segregation and made massive strides in housing. Marsha P. Johnson and Sylvia Rivera, two transgender activists from New York City, were also housing pioneers and are considered Founding Mothers of Pride along with Brenda Howard.

We need to do more

LGBTQ+ activism has brought hard-won progress on gender equality, including the right to marry and protection from discrimination from landlords and in public schools. Yet, we must do more to further LGBTQ+ rights.

Comprehensive research from the Center for American Progress shows that “more than 1 in 3 LGBTQ+ Americans faced discrimination of some kind in the past year, including more than 3 in 5 transgender Americans.”  You can learn more about LGBTQ+ protections here.

A recent triumph is that The Fair Housing Act now includes clear protections for LGBTQ+ people, issued by presidential executive order last year. And locally, Raleigh has recently joined the five largest cities in North Carolina in issuing anti-discrimination ordinances. You can learn more about how to advocate for these protections in your city here.

According to the Trevor Project’s recently released research, 1 in 3 (33%) of trans/non-binary youth have affirming homes, meaning approximately 67% of trans and non-binary youth are at risk of housing insecurity when they come out. This highlights how vital an affirming home is to the stability of youth in this demographic and how prevalent the epidemic of homelessness is for them. 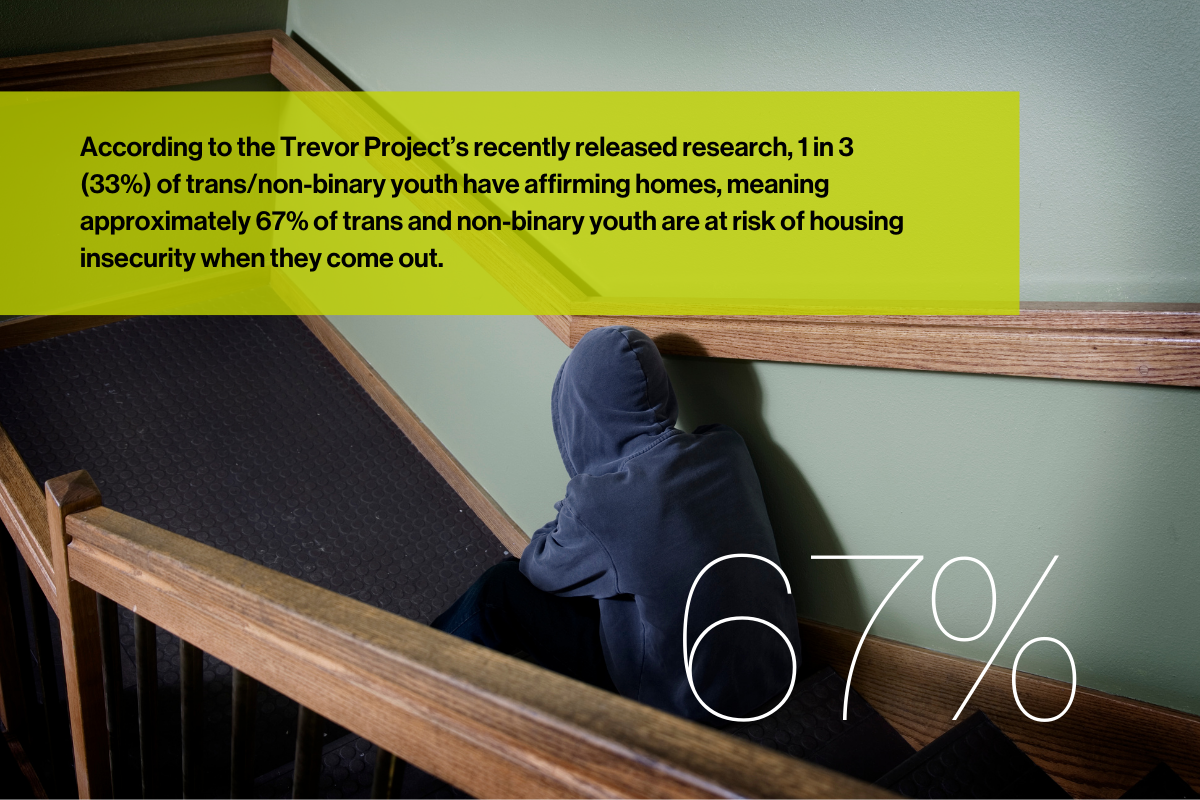 In fact, Time Out Youth Center in Charlotte, NC has documented escalating calls for assistance over the years. At Habitat, we know that having a stable home provides safety and stability. It is critical that we act now to protect LGBTQ+ youth and ensure that all young people are safely housed.

Currently, provisions in N.C. House Bill 755, also called “the Parents’ Bill of Rights” threaten to increase stigma around LGBTQ+ youth, and it’s moving through the legislature. The bill “requires schools to notify parents if any student under 18 asks to be addressed by a gender pronoun different from the gender assigned at birth...” according to Policy Watch. This would effectively out LGBTQ+ minors, regardless of whether they are ready to discuss their sexuality or gender with caregivers.

Stigmatization increases the likelihood of homelessness and escalates the public health issues LGBTQ+ people—and the rest of the community—face as a result. You can speak out against this bill here via Equality NC.

Are you a member of the LGBTQ+ community who supports affordable housing? We would love to hear from you! Email communications@habitatwake.org to share what you love about Habitat’s mission.