We Can Still Be Friends

as far as the east is from the west, so far has he removed our transgressions from us. Psalm 103:12 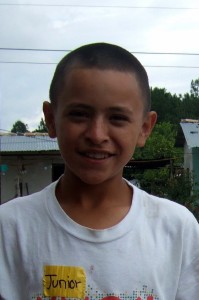 When I was in Honduras in April, I met Junior, a 13 year old resident of the village of El Rosario where we were building the first of 31 new homes planned for the area.  Junior was the leader of the neighborhood group of kids that would come to visit our work site after they finished school each day.  I enjoyed learning a new card game, Treinte-Uno, that Junior taught me and another one of our staff members, Pam Forsythe, to play. As I left the work site on the last day of our trip, I asked Junior what his plans were for next year.  He is in sixth grade, the top grade of the local school in the village.  He said he couldn’t afford to continue schooling and that he would be trying to find work.  It was obvious he would rather continue with school.  His desire to continue his education has been in my heart ever since.

Six weeks later when our second work team went to El Rosario, Junior presented them with a letter he had written for me.  In it, he said, “…yo se que yo soy pobre pero no importa para la amistad que tenemos esta amistad nunca se acabara.” Translated into English, Junior says, “I know that I am poor but that doesn’t matter because the friendship that we have this friendship will never end.” A 13-year old who is economically poor, but rich in his awareness of the world around him already understands at a young age that no matter how far apart we might seem—economically— we can overcome that great distance in love and friendship.

Kevin Campbell, former President/CEO of Habitat Wake, is a recognized leader in service to the goal of affordable homeownership in Wake County and around the world.  His unwavering professional commitment to Habitat for Humanity and its vision – a world where everyone has a decent place to live - goes back nearly 30 years. Follow him on twitter at @kevinhabitat.